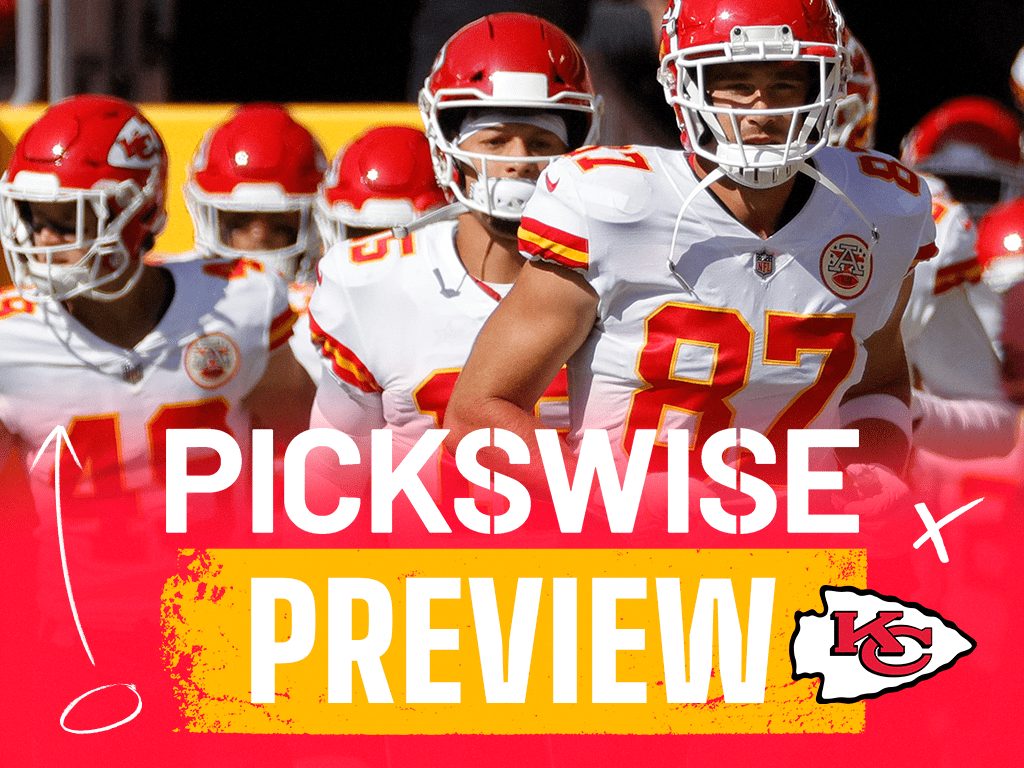 The Kansas City Chiefs have established a dynasty in the AFC West with 6 consecutive titles. However, the AFC West grew stronger this offseason with the Denver Broncos upgrading at quarterback, the Chargers strengthened their defense, and the Raiders brought in more offensive weapons. And the most notable move by the Chiefs this offseason was trading away Tyreek Hill.

Are the Chiefs on their way to their 7th division title? Or is the dynasty over?

The Chiefs are the favorites to win the AFC West division with +175 odds, the Chargers are close behind at +220.

Since the era of Patrick Mahomes began, it has become normal to expect the Chiefs to have a good season and make a playoff run. But to everyone’s surprise, Kansas City started the 2021 season 3-4, and Mahomes did not look himself. His incompletion rate was the highest of his career, he was throwing more interceptions, and he seemed off with his receivers. However, it was only a matter of time before Mahomes went back to who he was and took the Chiefs out of a 3-4 hole and brought them one win away from the Super Bowl. Kansas City finished the regular season on a 9-1 run and looked like the best team in football during that 10-game span. That marked the 6th consecutive year the Chiefs were crowned AFC West Champions.

First off, the elephant in the room. The fastest receiver in football and one of Mahomes’ favorite targets, Tyreek Hill, was traded to the Miami Dolphins. In a shocking move that sent five draft picks back to Kansas City, Mahomes lost a valuable weapon on offense. It won’t be easy to replace Hill, but Kansas City brought in JuJu Smith-Schuster and Marquez Valdes-Scantling and drafted speedy receiver Skyy Moore from Western Michigan. Compared to the rest of the AFC West, the Chiefs’ offseason was lackluster. The Broncos acquired Russell Wilson, the Raiders acquired Davante Adams, and the Chargers brought in J.C. Jackson and Khalil Mack. Even with the AFC becoming one of the strongest divisions in football, Kansas City still has one of the best quarterbacks in the game, an above-average receiving group, and the best tight end in the league.

It should be a close race between the Chiefs and Chargers for the AFC West in 2022, but the Chiefs should continue their dynasty for another year. Both offenses are very alike, but the Chiefs have a slight advantage with Travis Kelce. The defenses are very similar, and it’s hard to confidently say one is better than the other. However, the Chargers don’t have Mahomes. Don’t get me wrong, Herbert is an excellent quarterback and will likely throw for 4,600+ yards again in 2022, but the Bolts always seem to falter towards the end of the season, and that is when Mahomes and the Chiefs are at their best. Their dynasty in the AFC West may be starting to crumble, but it’s not falling just yet.

The Chiefs have a difficult schedule in 2022, but that shouldn’t stop them from going 12-5. It’s possible for them to go 13-6 if they win a toss-up game or win more games in their division than expected. However, 12 wins is the safer bet. I expect another dominant season in Kansas City en route to their 7th straight AFC West title.

Check out our best bets to win the AFC this season

The Las Vegas Raiders and the Kansas City Chiefs meet Sunday in NFL action from Arrowhead Stadium. Las Vegas is just 1-4 over their last…

Even though the Kansas City Chiefs are waiting for their 2022 schedule, they know who their opponents will be. Here are five games that are…

Paulo Antunes is taking the odds makers’ favorites, the Kansas City Chiefs to win the AFC West. https://www.oddsshark.com/nfl/afc-west-odds With Mahomes and Kelce leading the Chiefs’…