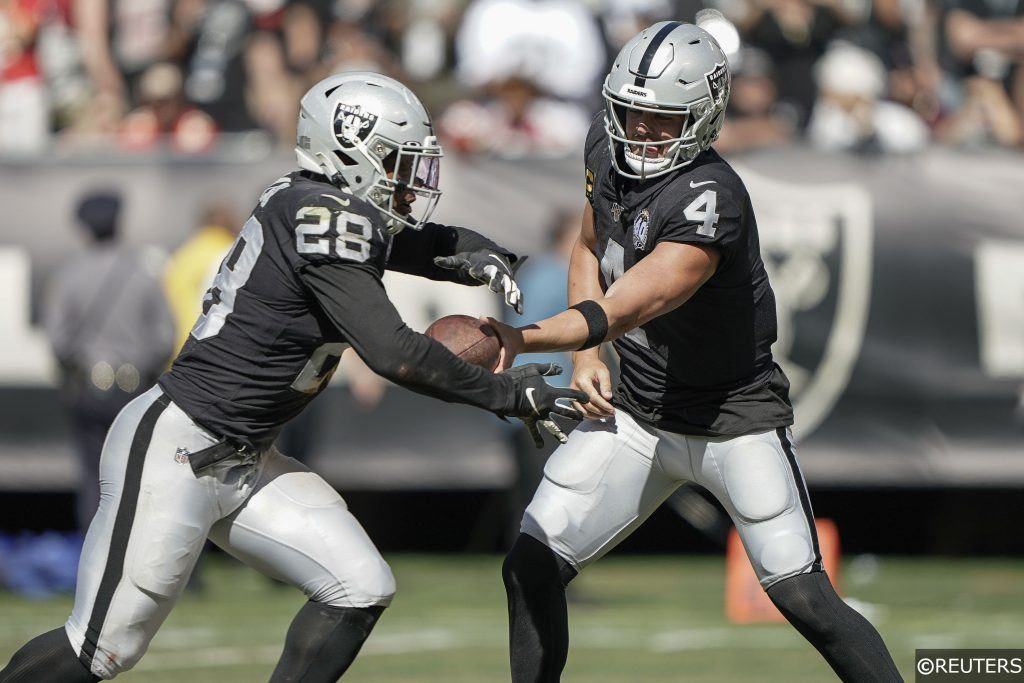 I hope you all had a great first Sunday of NFL betting, but the action isn’t over yet. We’ve got Monday Night Football coming up, and there’s also plenty of MLB to pore over. There are a lot of big contests coming up as we start the week, which always attract some big public sides. Let’s take a look at where the public money is going as bettors once again try to beat the books, with the Raiders leading the way on Monday.

Don’t forget to check out our free picks on the side and total for all of college football’s biggest games this weekend!

Now here’s something we don’t see every day. A public underdog. In a nationally televised primetime game no less. That’s pretty rare, so it’s a special occasion for our first Monday Night Football game of the season. The public had plenty of road favorites they liked on Sunday, but here they’re rolling with the home ‘dog. 64 percent of the bets and 66 percent of the public money are on the Raiders plus the points, per DraftKings’ internal numbers shared with us.

This could be an expression of confidence in Las Vegas and head coach Jon Gruden, or it could be a reaction to the onslaught of injuries the Ravens have suffered. Either way, bettors seem to be overlooking very serious concerns about the Raiders’ offensive line. We’re fading the public and taking the Ravens here. We also have a three-star play on the total, which I really like.

With only one football game tonight, let’s turn our attention to some baseball. One of the league’s best teams against one of the league’s worst teams? That’s almost always going to lead to a big public side. And that’s certainly the case here as the Rangers host the Astros in a battle for the hearts and minds of Texas.

Oddsmakers have this game as virtually even, but recreational bettors don’t see it that way. 67 percent of the bets and 77 percent of the public money are on the Giants -110 here in this NL West rivalry game. San Francisco has won seven in a row and their offense has been absolutely mashing lately, so this one isn’t too hard to understand.

The Padres on the other hand have lost three in a row, and the public usually loves to chase momentum. Yu Darvish will start for San Diego, and he has a 6.84 ERA since the beginning of July. We don’t see any reason to fade the Giants either.

MLB: Giants vs Padres over 8

Elsewhere in this same game, bettors are also flocking to the over. Nothing the public loves more than a good over. 70 percent of the bets and 67 percent of the public money are on the over 8.0 here at Petco Park. The Giants have been scoring a ton of runs, and Darvish has struggled lately, so this one is easy to diagnose as well.

That being said, the Giants are going with a bullpen game here, and their bullpen has been fantastic recently. The Padres have also been shutout three times in their past five games. With this game being played at the extremely pitcher-friendly Petco, we’ve got to back the under here.

NFL football is officially back. The 2021 season will get underway Thursday night, and there’s also plenty of MLB and college football action to pore…

We have plenty of MLB games to report, and we also have some NFL preseason action, so there’s still a lot to pore over even…

We have plenty of MLB games to report and we also have college football Week 1 to look forward to, so there’s still a lot…

We have plenty of MLB games to report, so there’s still a lot to pore over even with most sports off. Don’t worry, football is…

NFL football is officially back. Week 1 just wrapped up, and it couldn’t have been much more exciting. Now we’ve got a full slate of…

ActionNetwork posted a new post, Penn State vs. Villanova Promo: Bet $10, Win $200 if Either Team Scores a Touchdown! 48 minutes ago