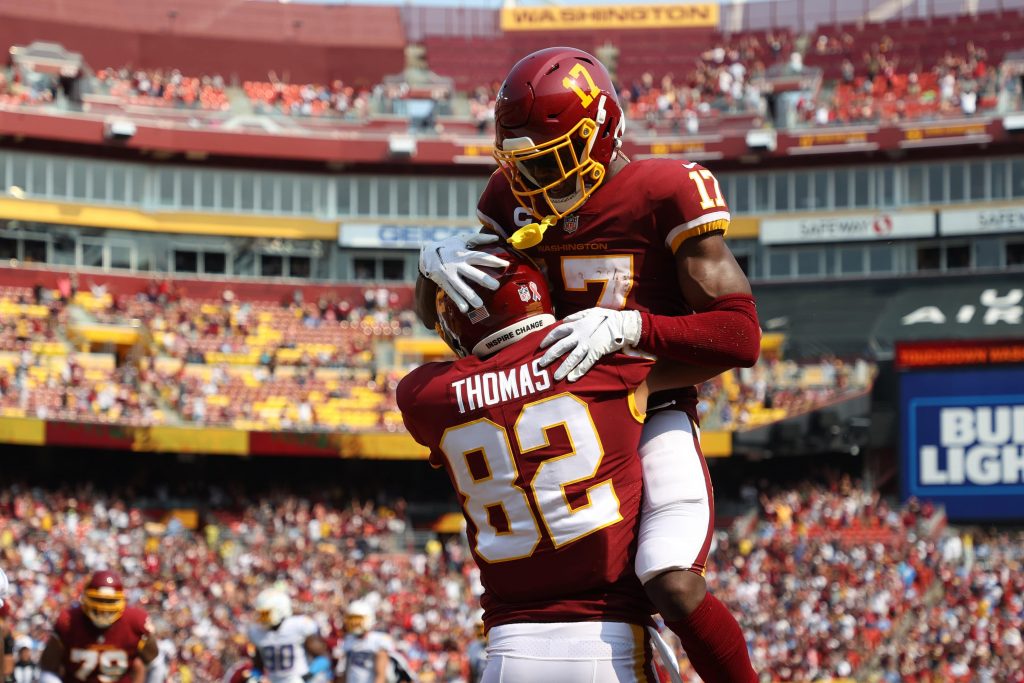 Week 2 of the 2021 NFL season gets started with some NFC East action as the New York Giants meet the Washington Football Team at FedExField on Thursday Night Football. Both teams began the season with losses, which is nothing new for this division, and will be looking to get their first win of the season. Washington suffered a blow with quarterback Ryan Fitzpatrick placed on IR, meaning Taylor Heinicke will start under center.

This is sure to be an intriguing matchup, so why not add to the excitement with a same game parlay? We’ve got a 3-leg parlay here that offers enticing odds of +1156.

Logan Thomas to score a touchdown (+200)

The benefit of same game parlays is that you can combine plays that on paper appear slightly contradictory to boost the odds, when there isn’t actually too much crossover. That is the plan here, as taking the under on total points and Heinicke passing yards line up with one another, but throwing in Logan Thomas to score a touchdown gives the odds a nice boost. Even in a low-scoring game, you have to think Washington will at least find the endzone, and I’m banking on Thomas being that guy. Let’s break them down one by one.

This is a pretty low line for a primetime game, but I still think it’s worth taking. The Giants have a tremendous receiving corps but their woeful offensive line means Daniel Jones doesn’t have the time to use his wideouts to their full potential. Washington boasts one of the most lethal pass-rush units in the league, and they should be breathing down Jones’ neck all game. The Giants signal-caller also has turnover issues, which could spell problems for New York.

On the flipside, we have Heinicke starting for Washington. The Old Dominion product looked tremendous in last season’s wild-card playoff game against the Buccaneers, registering 306 passing yards, but when he came in last week against the Chargers he played a very conservative game (11/15 for 122 yards). If this was being played on a Sunday I’d have high hopes for Heinicke, but given this is a short week I can see Football Team head coach Ron Rivera keeping things steady, especially given the Giants quietly boast a sturdy defense.

These teams love a low-scoring battle — the under has cashed in the Giants’ last 9 games and it is 10-1 in Washington’s last 11 games on grass — and another one of those looks likely.

A lot of what I said above is why I like taking the under in Heinicke passing yards. As mentioned, the fact Washington is playing on a short week means Heinicke will have minimal preparation with the starters and could result in the Football Team taking few risks. Further, Antonio Gibson had 20 carries for 90 yards last week, and could be leaned on again for Washington’s offense to take some of the pressure off Heinicke. Ultimately I can see the quarterback playing a solid game, but this line looks a little too high for my liking and am happy to side with the Giants defense causing him problems.

Logan Thomas to score a touchdown (+200)

Although I think Heinicke could have his struggles, I still expect him to have some success and a touchdown pass to Thomas gives our parlay odds a nice boost. Thomas found the endzone in last week’s defeat against the Chargers, and had three receptions for 30 yards. A lot of what I mentioned regarding Heinicke’s conservative play benefited Thomas last week as the quarterback was making short, quick passes to the tight end, and I expect a similar story. It’s also worth noting that Heinicke targeted Thomas nine times in last season’s playoff loss to the Bucs, so clearly there is some rapport there.

Make sure you check out PropBetGuy’s best player prop bet for Giants vs Washington!

Week 2 of the NFL season kicks off on Thursday night with the New York Giants and Washington Football Team facing off. Let’s take a…

Week 2 of the NFL season kicks off on Thursday night with the New York Giants and Washington Football Team facing off. Let’s take a…

The Washington Football Team will host the New York Giants for Week 2’s Thursday night matchup. Taylor Heinicke will make his first start of the…

espn posted a new post, There's bad, and then there's this week's Bottom 10 13 minutes ago

espn posted a new post, Sleepers, breakouts and busts for 2021-22 13 minutes ago

FanSided posted a new post, The Whiteboard: The Ben Simmons trade saga is a lose-lose-lose 23 minutes ago